Home » Who Empowers Us to Speak Up? 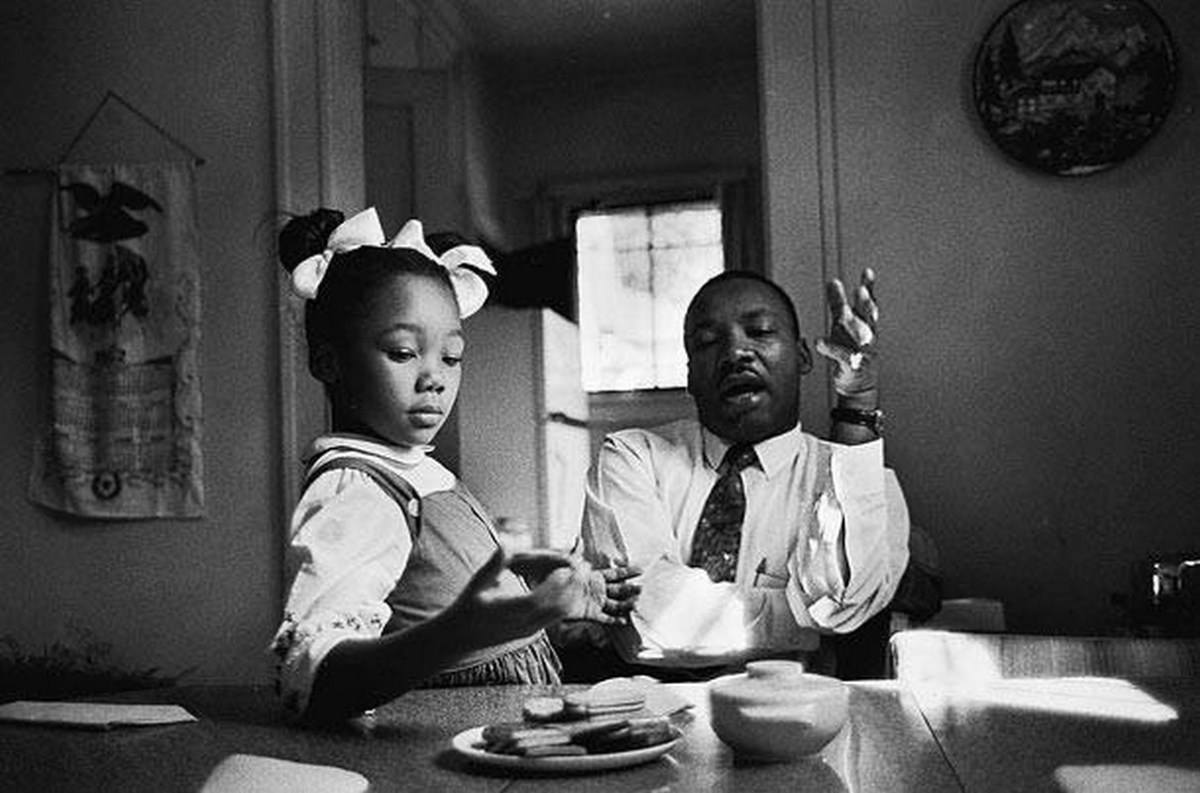 MLK Jr.’s writing gets me thinking about how to help my students speak up about what they know and see to be true in this world.  The brutal stuff.  The beautiful stuff that exists alongside the brutal stuff.

King’s the Daddy Mack of eloquence–whatever you think of him, it’s hard to discredit that bit.  His writing, and his speeches, speak up in ways that land sound bites on t-shirts, yes, but they also unmask how our institutions and attitudes systematically undermine and destroy our humanity.

He puts the painful and critical ingredients of social justice into phrasing so musical, so clear, so rich with common references, that it’s hard not to listen.  That’s a marker of great writing– even if you didn’t want to, something makes you listen.

The reach of good writing is farther than you think

To tune MLK Jr out is like tearing your eyes away from a TV where a major accident is being reported– hard, near impossible.  I want his cadences to get into my students– of every color and creed– by osmosis, repetition, sustained exposure.  I want them to write better despite themselves.

This blog focuses on how the practice of good, clear writing, by a writer who is aware of his or her values and character, can get you into (your dream) college, but the reach of good writing is and should be much bigger and bolder than just that.

Punch above your weight

It’s true what they say: silence is not just the opposite of speech. The truth might move at light-speed when it’s finally set free, but to speak up, we first have to slough off the weight of a thousand slumbering elephants in our shared room.

They are in the classroom, too, those heavy taboos that stop humane progress. My dream, my prayer, my practice, is that every child in every school be empowered to punch way above his or her weight, to speak up with voices that cannot be ignored because the writing is too damn good, and to send the elephants back to pasture.

My 12 year-old student, Jolita, responded to my writing prompt on “a time you didn’t speak up” by exploring a moment when a frustrated teacher unconsciously condemned his class to remain stooped under the low ceiling of poverty. In that moment, she was too stunned by his thoughtlessness to say much back, despite her fiery personality and quick mouth, rarely at a loss for words.

But in her essay, she found her means to speak up against the subtler forms of everyday oppression that can make the path to education murky for some and impossible for others. She was awarded 3rd prize in the Brooklyn Martin Luther King Jr. Commission’s contest, and when she read the essay out loud, she was met with stunned attention in an otherwise restless Monday afternoon audience.

“Letter From Birmingham Jail” as template

We wrote these essays in Word Up, my personal essay writing class at The TEAK Fellowship, while reading Martin Luther King Jr.’s “Letter from Birmingham Jail”(it’s long; read it all), in which he lays out his non-violent platform for both his detractors and supporters. In it, he discloses the ache and claw of racism in his own life, and proclaims (among the many unforgettable phrases), “a threat to justice anywhere is a threat to justice everywhere.”

That is, if we are toying with anyone’s justice anywhere, our whole ship is going down.  Tall order.  Big words.  So what are we doing?

What is the promise of your prose?

Can we speak up in ways that make our values clear, and that allow us to take a stand when so much is ugly, so much unequal, so much a mess in this world?

When so many more of us do not have, compared to the few of us who have?

When to raise a ceiling, to raise a bar, it takes a huge cadre of workers, and the vision to see what the renovated rooms will look like– free of elephants, and with space for all to rise?

Look back at your writing; you don’t need to be inflammatory to speak up.  You can be appealing, appropriate, and applause-worthy.

Contact us to set the bar higher, and to speak up for the big stuff.