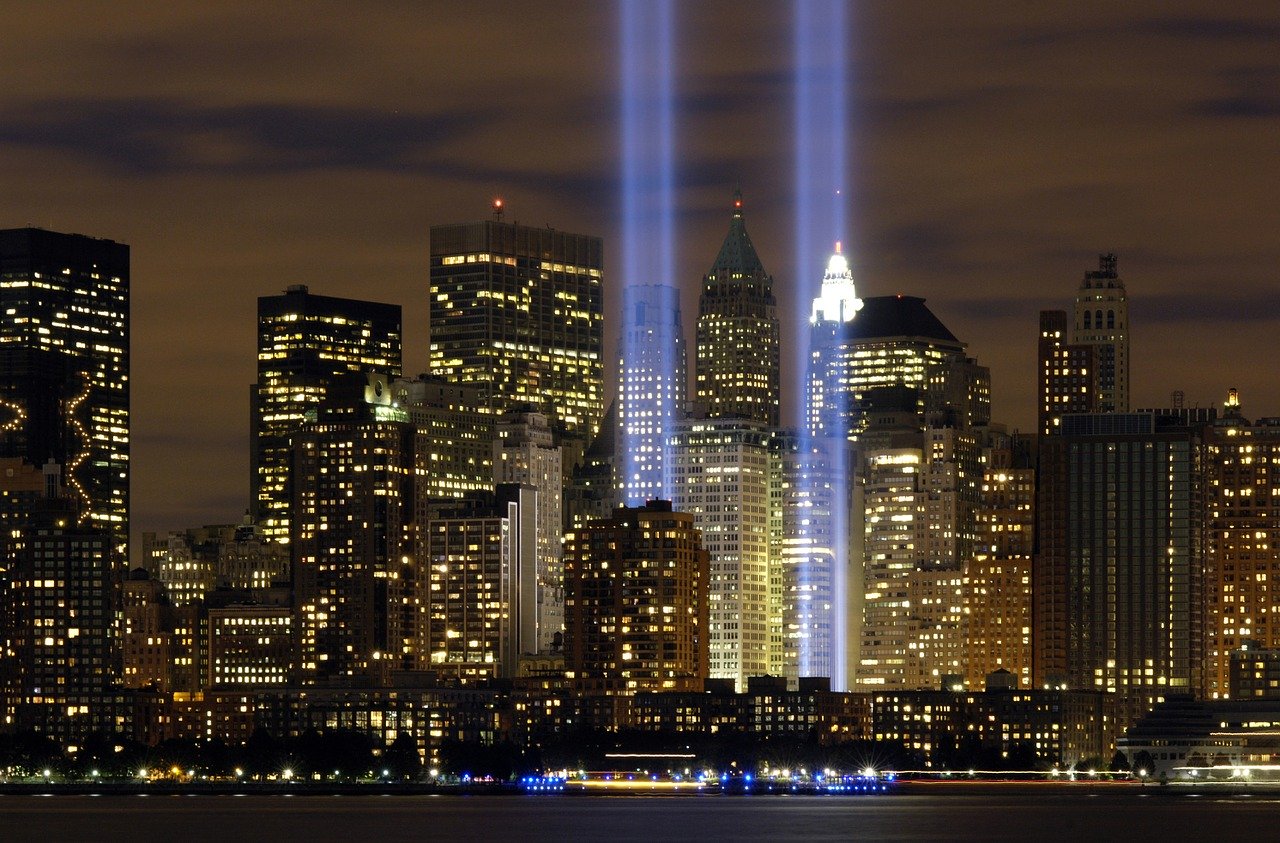 TO mark the anniversary of 9/11, I’m not going to dispense college essay advice. I’m going to let the teens in this story speak for me. And to my teen writers and applicants, remember that how you reflect on your memories now will change over the years, and that we love you, and we need you to be you.

When I worked in a prestigious NYC private school as a Latin teacher, my first hour of my first day teaching, as a total newbie, was September 11th 2001. The Sept 11th. I was 21 years old, barely out of college, a mere four years older than my oldest students, at the same school I had attended 6th-12th grades. I had been a teacher officially for all of 10 minutes when the first plane hit.

That bright morning, the workmen on the roof across the street went berserk, shouting and cursing fantastically and pointing at something our view obstructed. My classroom was on the 9th floor, and the high school students ran to the window excitedly to look for the cause of the fracas.

”No matter what is happening outside the window, what’s happening in here is always more important,” I chided them–because of course it doesn’t get more exciting than the opening spiel to a Latin Language course. They ignored me. I didn’t know then that the ending of verbs would not be the most important thing, or that certain verbs–crashed–could grind everything, including our world as we understood it, to a halt.

I felt teacherly. A teacher redirects attention, right? A teacher helps you focus on what matters in that moment, right? Turns windows into doors, or helps redesign the mind’s architecture? Was the classroom supposed to be an interruption, or an invitation? What about when buildings are felled in minutes, do we not have to let other assumptions fall down, too?

Turns out, you don’t actually always know in the moment what the most important thing is. That year, I’d get exceptionally good at realizing what I knew nothing about.

Children’s book author John Muth says, “The most important one is always the one you’re with.” That was true then and it’s true now. It’s always true in an emergency. It’s true when past tense becomes nostalgic and present tense becomes hyperbolic. It’s true when you forget how to conjugate verbs of the future, or suspect it doesn’t matter.

The head of high school opened our door and with exceptional calm said that planes had flown into the towers and we needed to evacuate to the basement immediately. The students filed out, uncharacteristically compliant and silent, and no one so much as breathed heavily. Once the entire building was sheltered underground, kids sitting knee to knee on the floor and many openly weeping, the faculty were tasked with combing the floors for anyone left behind.

I felt stranded between my grown self and my kid self, unsure how I was perceived by others, faculty who were 20 years my senior and more, and students some of whom were already taller than me. But I knew, shocked and perplexed, I had a task, and I could do a task.

At that hour, lacking context for what had happened, in limbo between impact of the planes and their dramatic fallout, most of us were in disbelief or already terrified.  Administrators were straining at the incoming news, more questions than answers. Smartphones were not yet ubiquitous. We were packed into a school basement under fluorescent lights processing unstable facts. The trauma was still just intellectual– we hadn’t seen anything gruesome or violent yet, the charred particles, the awful smoke, the photos of missing– no one among us had yet knowingly suffered.

The staff was split up and assigned floors to sweep for any stragglers. It felt routine: we were merely helping to look for some kid’s forgotten algebra textbook, because his mother had called, or reminding a teen that, no, sorry, you can’t grab a sprinkle cone from the ice cream truck during a fire drill.

I swallowed the strong urge to call my own father, who worked blocks away from the school, praying he had not been in the lower Manhattan courts. I swallowed the urge to think about what terrible things could be next.

I climbed the main stairs two at a time. The stairwells were never this empty, always a stray kid stalling on the way back to class, or a teacher schlepping books, materials, or crappy weak coffee and black Lipton Tea in styrofoam cups from the faculty lounge.

My adrenaline was high, my stomach uneasy, and the space eerily quiet. Would 10 minutes of teaching be my whole career? Were we all going to die?

I liked the quiet then, even a post-emergency quiet, and I like it now. It was not unlike the quiet of waiting for someone to take a last breath, which I have done, or the quiet when a pregnant person, in the howling throes of transition in labor with their baby, gets to take a cat nap between contractions. The room, the world, bunches in on itself.

Scanning the 10th floor for stragglers, as I peered into a classroom, I saw something irreverent and beautiful. Nestled into a window ledge, two high school students (notorious as trouble-makers) were ravenously making out in the empty classroom. I mean, they were really going for it. Kissing like they were trying to taste one another’s esophagi, or the way a mother bird aggressively feeds its babies, shoving nourishment down it’s throat, unwilling to miss the target.

The towers were already aflame behind them. At least in my mind’s eye.  Now I don’t know if that’s just my memory, 20 years later, remodeling some other undramatic view. But when I remember them in silhouette, it’s because the lip of NYC was burning, and the knowledge of the tower fires, and the lives it consumed, took over everything else.

Their behavior told me everything I needed to know about human need. I paused in the hallway, thinking how fairytale-like it seemed to ask if a passionate kiss is worth the price of death. Then I stuck my head in, and in my most teacherly voice, I asked them to please come with me downstairs for safety. And did they know the whole school had evacuated to the basement, please?

They did not separate right away– in fact, they lingered with limbs entwined, as if enjoying the spectacle they were making. Then they looked at me long and hard, like I didn’t possibly understand ACTUAL refuge, or anything else, and, even more possibly, had never made out with anyone. Ever.

I understood the urge to go down in passion rather than pain. I understood that if everything was falling from the sky like Chicken Little squawked about so tediously, if things were on fire that should have been unalterable, cool metallic, then why not.

They rolled their eyes at me, hard, like synchronized swimmers out of water, as they left the room hand in hand and aggressively swung open the stairwell door. I let them get ahead of me by a few flights, which they did with purposeful slowness.  Then, unobserved, alone, I broke the rules too, and slid down the stately bannisters. Because when the universe flips the rules on you, there is some stuff you have to let go.

I went to the nurse’s office in the basement to ask if I could please call my own father, as I had done so many times as a student for asthma or terrible sore throats. The line was busy.

Waiting for him to arrive, wanting to rest my cheek on the lapel of his cool work suit, I saw the two teens I had busted in the corner of the basement, petting one another again (never missing a chance for a PDA), and I gave them thumbs up. This was not because their PDA’s weren’t annoying, or even totally inappropriate (nearby elementary kids looked at them quizzically and sorrowfully–is this what we’re doing?). But because no one knew what would come next, so who was the authority on how to spend these minutes, these hours, these breaths? Not the new Latin teacher. Not her.

When I coach students on writing their college essays, we often discuss memories that are very important to them, even life-altering. And I remind them, how you process and reflect on this now might be different than how you will in 1 year, 5 years, 10 years, 20 years. And that’s OK. Your college essay captures your now and your idea of the future.

We’d do well to remember we don’t always know what is the most important thing, or what knowledge, details, actions matter most. We’d do well to remember that now, with 2020 full of its own charred structures, that we might have a very different perspective in 20 years. And that teenagers are meant to put passion over practicality and good sense; they want to live, and they want to show us all the things living can be.

On 9/11, and every day, we can even celebrate and thank them for it.